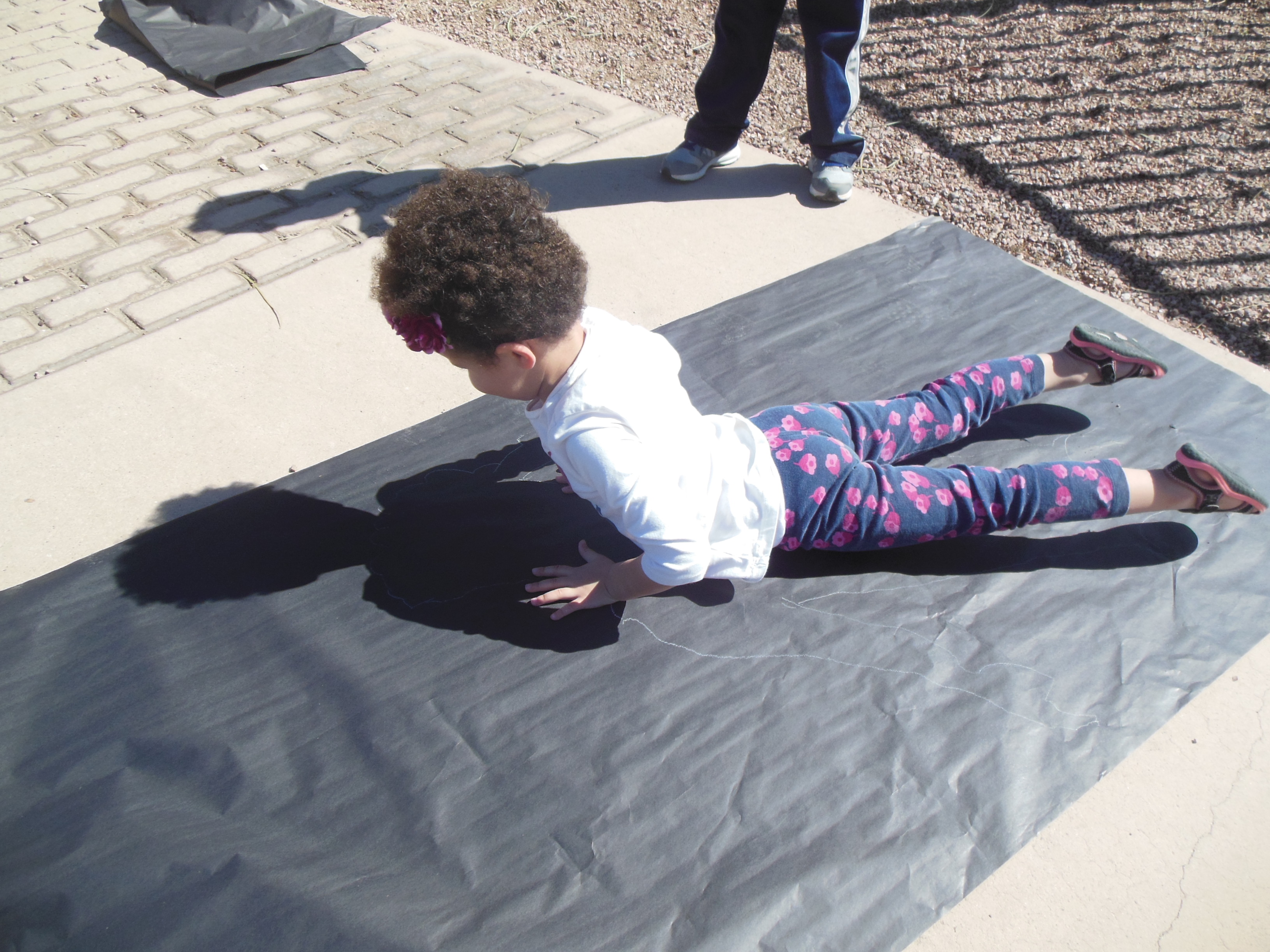 Shadows are fascinating, and they can be a lot of fun. Robert Louis Stevenson wrote a now-classic poem called “My Shadow.” Many of us remember it from his A Child’s Garden of Verses. It begins:

I have a little shadow that goes in and out with me,

And what can be the use of him is more than I can see.

He is very, very like me from the heels up to the head,

And I see him jump before me, when I jump into my bed.

And who can forget Peter Pan’s shadow, that was taken captive – and that Wendy had to sew back on to his feet so he wouldn’t lose it.

Most of us hardly notice shadows … until we see something striking or unusual. 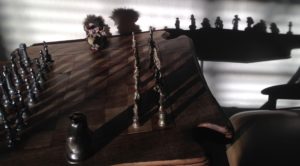 This reminded me of the shadow explorations we had done with my class of preschoolers at the Summit School of Ahwatukee last year. Once they got started, hardly anything engaged them more!

One morning, the sun was shining on our Group Time carpet, right in the eyes of some of the children. “Move out of the sun into a shadow, we suggested.” And a shadow exploration was born. “Where are those shadows coming from?” There were plenty of guesses, and it was not long before a student pointed to the sunlight coming through the window. But it was a small area, and the fluorescent lighting didn’t produce many other visible shadows in the classroom. So we decided to see what shadows we could find out on the playground. This being sunny Arizona, in February, we found plenty of shadows … shadows of the tricycles, the fence, the trees, and shadows of our bodies. 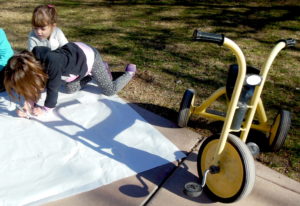 We saw a shadow bend as it climbed onto the tire bouncer, and change shape as a tricycle turned on the paved path. We could chase and step on each other’s shadows, but we couldn’t run away from our own shadow. …

Until a student ran into the shade and made his shadow disappear. This reminded me of Frank Ash’s wonderful story of Bear Shadow. So we read stories and poems, including R.L. Stevenson’s “My Shadow,” which continues in its second verse like this:

Not at all like proper children, which is always very slow;

For he sometimes shoots up taller like an India-rubber ball,

And he sometimes gets so little that there’s none of him at all.

(You can read the rest of his poem here: https://www.poets.org/poetsorg/poem/my-shadow)

Had the students noticed that their shadows “like to grow?” The next morning, we brought out some large pieces of black bulletin board paper and white chalk. A couple of students volunteered to stand, very patiently, while we traced their shadows. 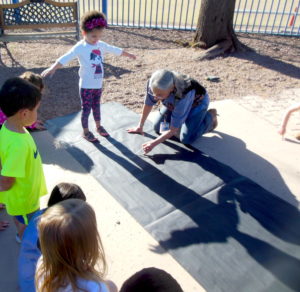 At 9:30am, their shadows were very long! They pointed to the sun with one arm, and to their shadow with the other, their outstretched arms showing the angle of the sun. 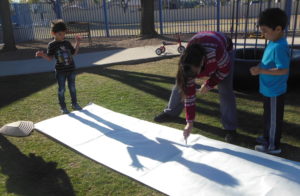 The students lay down on the tracing and discovered their shadows were almost twice as long as their actual bodies!

We repeated the tracing at 1:30 pm. When one little girl discovered that she was now the same size as her shadow, she was convinced that she had grown to fit her shadow during rest time! 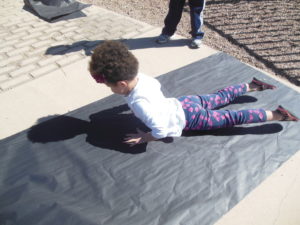 At this stage, by the way, we do not always correct their explanations to provide the scientific answer. While we encourage inquiry and critical thinking, hands on exploration, and scientific curiosity, the children’s enthusiasm for discovery and willingness to use their own logic and make guesses is more important than “correct answers.” They will have many more years of school and science in which to discover the empirical answers. 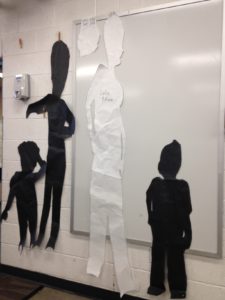 We cut out the shadow tracings, and they are still on the wall, a year later.

The curiosity about shadows continued indoors, where we used cardboard boxes lined with black or white paper to project shadows. The boxes afforded some darkness in the sunlit classroom. The children used flashlights to experiment with projecting shadows of toy animals, their hands, and other objects. The students made discoveries about size and distance and angle of the light. 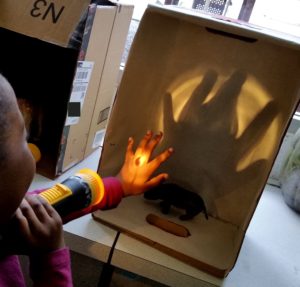 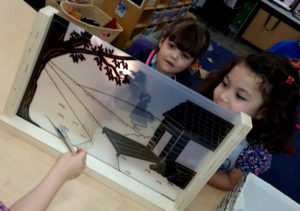 We also provided a shadow puppet theater so that they could create shadows with stick puppets to tell familiar stories.

This can also be done by acting out stories behind a white sheet, using a large bright light behind it. How about the sun?

Yes, do try this at home!

For more on this topic, you can read about another exploration of shadows that was undertaken by a classroom of preschoolers in Massachusetts, which is posted on the website of the National Association for the Education of Young Children: http://www.naeyc.org/blogs/what-is-a-shadow