And this happened: math in the moment

These are some of my favorite moments… when learning is happening because you, or a student, or your child “just thought of it” and you “seize the moment.” It might be that you will teach or learn or discover something “embedded” within another activity. Or maybe it is just an opportunity to practice, “show what you know,” or see something in a new way. I’m sure it has happened to you. It can be the most fun and engaging (or barely noticed) opportunity for learning.

So this happened during Group Time in our preschool classroom. My co-teacher and the students were singing “This old man, he played one …” which was becoming a favorite song in our class of diverse ages and multiple home languages.

This old man, he played one,

He played knick-knack on my thumb,

Give a dog a bone,

I pulled out my homemade poster of the song, showing the numerals (1-10) with the rhyming items named in the song, to help our youngest and those with limited English to follow along.

My co-teacher turned around and noticed the Bead Frame (or Rekenrek) with 2 rows of 10 beads, behind her. We had not used it in awhile. She placed it on the floor in front of her, in the circle of kids. After we sang the next verse (number 3) she asked: “How can you show 3 on this bead frame?” A student moved in and counted 3 red beads as she moved them to the middle of the top bar. She moved them again as she counted aloud to verify that there were 3. Everyone wanted a turn.

And so it went … with students using different methods to count and show the numbers!

We sang, “This old man, he played six, he played knick-knack on my sticks….” 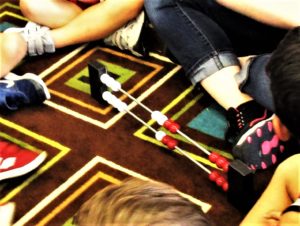 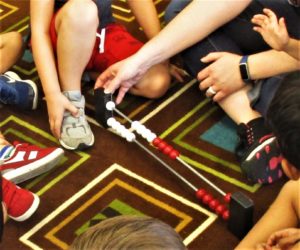 To show 8, a student cleared all the beads, the red to one side and the white to the other. Counting by 2s, he simultaneously moved one white and one red bead to the center of the bar. Then he moved one more from each side to join them (3 more times, leaving one white and one red bead alone at the ends of the rack). He counted the 4 white and 4 red beads in the center to prove that there were 8 beads together.