What we learned from 5 rows of apples 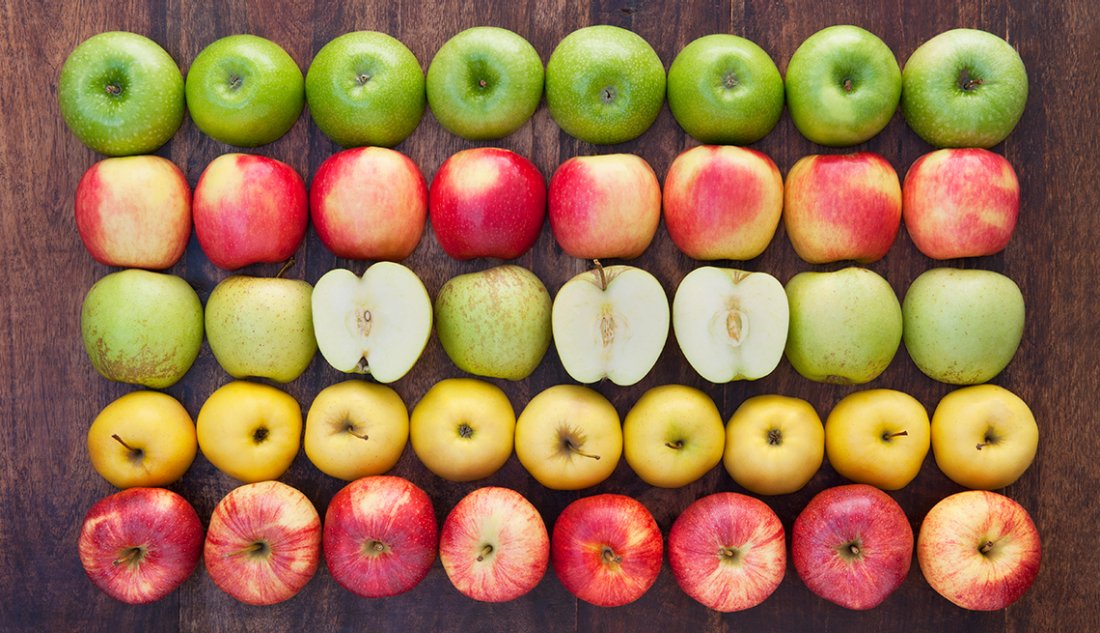 I am intrigued by the way that curious young thinkers observe, question, reflect, analyze, and conclude — to come to a new understanding. This is early learning at its best! It is not often that I get an extended period of time to observe (and make note) of this process in detail. So I look for those moments of uninterrupted exploration … maybe with a small group of students on the playground, or with one non-napping student at quiet time, or with a child or grandchild at home.

Here is one such wonderful extended moment of exploration and learning that I shared with a 5-year-old I’ll call Rory. His curiosity and questions led from one step to another. My contribution was to provoke another look with “What do you notice?” and “What do you wonder?” (Note: this could have been a group activity with various students contributing these and other observations. I just happened to have the opportunity to work with one child for this lengthy, focused conversation.)

Rory is always intrigued by photos or drawings of sets of objects and answering the questions: “What do you notice?” and “What do you wonder?” He is observant and analytical.

He likes to draw his own version of what we are looking at in order to illustrate — for himself, or to explain to someone else — what he is thinking. While it sometimes seems that he is not listening, it turns out that he is exploring another way to interpret the thing we are talking about. Sometimes, this prompts me to realize that he is focusing on something entirely different than I am, and this leads to an interesting conversation. During this discussion, I picked up on our different observations, using the apple array as a concrete example, to discuss perception, focus, points of view, etc. in terms that a 5-year-old could understand.

We started by looking at a photo of apples arranged in 5 rows on a cutting board. (This is the same photo from my previous post about apple tasting)

I asked Rory, “What do you notice?”

R: “The picture is a rectangle.” (I had expected a detail about the apples.)

R, using his arms to demonstrate parallel lines: “Two sides are not the same as the other 2 sides. If they were all the same it would be a square.”

Me: “What else do you notice?”

Me: “Well, it could be. It’s a more complicated pattern, with 3 colors. It’s a pattern if you repeat it.  So if you were going to repeat that whole pattern, what would the next row be?”
R, pointing to the top row: “Green.”

M: “Right. Because you have to start again from the beginning.”

Rory decided to draw a few patterns of his own; he asked me to tell him what the patterns were. 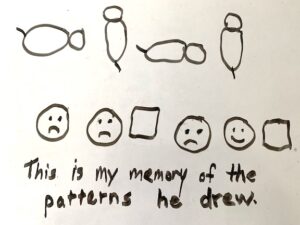 I read the first (showing alternating shapes) as “A-B, A-B” and the second, (showing frowny faces followed by a square) as “A-A-B, A-A-B”.  But he had drawn one face with a smile instead of a frown, so he gleefully asked me if I had noticed the “mistake” in the pattern!

I asked him if he knew that poems can also create patterns with the rhymes at the end of each line. He said he didn’t know that, so I invited him to listen to one of my favorite poems, Robert Louis Stevenson’s “The Swing.” I read one line, and one stanza at a time, emphasizing the end of each line. He asked me to read some lines again, listening closely. (This more abstract, auditory form of pattern requires identifying the rhymes and remembering the sequence.) He identified the rhyming words, and together we discerned the rhyme patterns.

His first observation was (to me) not the most obvious: “Some have stems.”  He examined the apples closely and pointed out which ones had stems, that in some rows the apples were facing different directions, and that only the red rows had all the apples lined up the same way. He finally commented on what (to me) was the most obvious.

R: “Only one row has apples that are sliced.”  He decided the sliced apples don’t belong.

I took this opportunity to talk about our having two different — but both valid — interpretations. I said, “You noticed that those are the only apples that are cut, and they look white inside, not green, so you’re right that they do not belong in a row of whole, green apples.  May I explain why I don’t agree with you?”  He nodded, so I explained: “I can see that those cut apples are green apples, so they do belong in a row of green apples.”  He agreed that we can think about them in different ways and that both ideas are good.  I explained that they are both valid ideas “because we were able to explain our reasons with details that we both can see.”

Next I asked, “What do you WONDER?”

R: “Are there more apples that we don’t see?”  I thought that was an awesome question, one of the most important to ask. So I asked why we might want to know that, and how we could try to find out. We both agreed that the empty space around the apples on the cutting board might indicate that there were no more apples, or else they would have put more on the board. Rory suggested they may have put another bowl of apples out of sight. We discussed the fact that making decisions using only what we can see and know about something might not tell us the whole story because we don’t have all the information, which was an important thing to remember.  I repeated that he had asked a very important question.

Finally, I asked, “I wonder how many apples there are in this picture.  Can we find out without counting all of them?”

He turned the paper over and wrote the numerals 1 through 8.  He then touched each numeral as he did his best to count by 5’s (with 8 steps). Starting over a couple of times, he triumphantly said “40.”  I agreed that eight 5’s are 40, and asked if he would use the picture this time, to count by 5’s again, this time touching the top apple in each column.  He touched the 8 apples and again concluded it was 40.  I said, “You have now shown me twice that eight 5’s are 40.  Do you think that five 8’s are also 40?”  He said, “Yes.” Although he did not attempt to count by 8’s, I believe he was aware that the number of apples was fixed, so the total should be the same whichever direction he counted.

To make one more point about facts and assumptions, I said, “That’s correct. Both “eight 5s” and “five 8’s” are equal to 40.  But … we should make sure that there are actually 40 apples. Would you now touch and count every apple?”   Rory did so, and he was very surprised when he reached the last apple and said, “41.” !!  He looked at me quizzically.

I said, “You counted correctly. There are 41 apples.  So why did that not equal 5 rows of 8?”  After a few seconds of thought, Rory counted the first row – “There are 8 apples in this row.”  He did that for each row and discovered that the fourth row had 9 apples!  “Aha,” I said, “so they tricked us – all the rows were not the same.  They snuck an extra apple in there.  Why didn’t we notice that?”  I continued, “All the rows line up at both ends, so they look the same….”  Rory examined the yellow row and concluded that the yellow apples are a little smaller … so more apples could fit into the row!

I asked Rory, “What is something that we learned from this today?”  He replied “you always have to check to see if you are correct!”

2 Comments on “What we learned from 5 rows of apples”